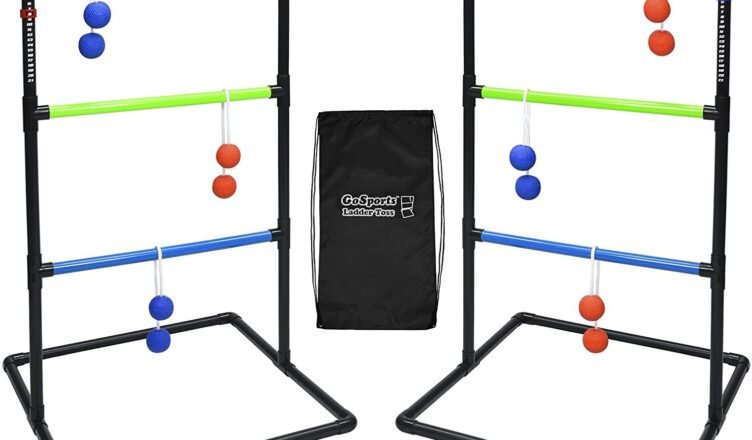 Ladder Toss is a game in which players throw balls connected by string at a three-runged ladder. 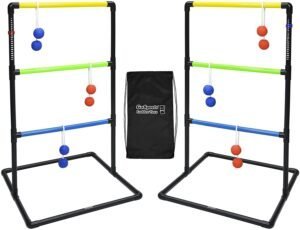 Right now you might be saying to yourself, “Hey, I remember playing Testicle Toss as a kid!”

But, unless you were born in the late ’90s or 2000s, the Ladder Toss that you played as a kid was likely a homemade version.  (Or, you played a version of Testicle Toss,  that we don’t condone here at The Cornhole. Nor have ever we, or would we, ever have played.  OK then, moving on…)

Let me explain the history of Ladder Toss, although vague and disputed, speculation says that early iteration of Ladder Toss originated in Mexico and made its way to America in the days of the old west. What we do know for certain is that the first patent of the game occurred in 2002 by a man named Robert G. Reid, who said he got the inspiration from the game he often played with his family. In March of 2005 he sold his patent to Ladder Golf LLC where they began mass-producing it.

So up until 2005, Ladder Toss didn’t really have concrete rules, how you played changed family to family.

You can definitely still brew up your own house rules even today, as you can with most yard games.

Setup is as easy as placing your two ladders 15ft apart and grabbing the three bolas of each color. Players alternate throwing their bolas, one at a time, the first player/team to get exactly 21 points at the end of a round wins, but be careful not to exceed 21 points or your points that round won’t count.

In the case of a tie the game continues until one player is 2 or more points ahead. The scoring is simple, 3 points for the top rung, 2 for the middle and 1 for the bottom (players may choose other scoring rules such as a bonus point if all rungs have a bola or all 3 bolas are on the same rung).

Click here for a more in-depth look at the Rules.

Ladder Toss vs Other Backyard Games

So how does Ladder Toss stack up to other popular yard games like Croquet, Horseshoes, Bocce Ball, and the all-mighty Cornhole?

Well, with games like Croquet and Horseshoes (as well as many other yard games) you need to steak things into the ground in order to play. This limits where you can play those games, I mean, imagine trying to play croquet at the beach and, as much as I adore Cornhole it’s not exactly something I want to lug around on a vacation. (But if you did want to lug around a cornhole set, F2C makes a pretty sweet aluminum cornhole set that is perfect for vacations.)

GoSports Ladder Toss is extremely portable, coming with a wearable carrying bag(backpack), making it a great choice for camping, your next tailgater, or a family outing.

Even if you’re a homebody and plan to only play games in your yard, Ladder Toss is way less of a commitment than installing a horseshoe pit or steak and is a great addition to any yard games repertoire. 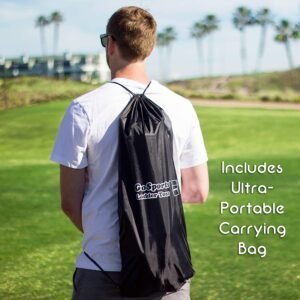 If you have small children this is a great game for you! It’s simple to set up, easy to carry, easy to take down and put away, and child-safe. You could take this to a park, play a quick game with the kids and take it back home without the hassle that other yard games would entail.

It’s so simple and easy to set up and put away that I’m sure even your child could do it for you. Something else I really like about this particular ladder toss set is that each ladder has a built-in score tracker. No more trying to keep track of the score in your head and being cheated out of victories.

I wanted to point out this ladder toss kit in particular, switched to a more heavy-duty PVC to make their product more resilient, due to customer complaints of it melting or warping in the sun.

With that said, we are still talking about PVC here. Unlike a cornhole board, which is typically made out of solid wood, they’re not quite as tough. It’s important to not leave it out in the sun, or you could risk it warping.

But, let’s be real here, this ladder toss costs under $30 and comes with everything you need to play making it a great entry point for your first backyard game.  A cornhole board can easily set you back $100-$250, making ladder toss a great option for people looking to have some fun in their yard without having to pay big bucks.

And if you want to upgrade your game, GoSports also offers a Pro Grade version of the game. 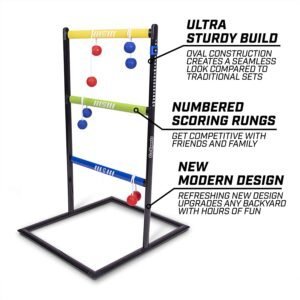 And not everyone can be playing cornhole at the same time.  Ladder toss also makes a great game to warm up with and enjoy while you are waiting for your turn on the cornhole boards!

Now let’s list out some of the pros and cons of the GoSports Ladder Toss Indoor/Outdoor Game Set. 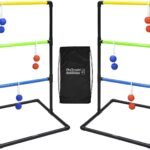